Ball bearings are a sub-category of roller bearings. In ball bearings, rolling elements between a inner ring and an outer ring reduce frictional resistance, in contrast to lubrication in the case of plain bearings. The rings secure axles and shafts by absorbing radial and/or axial forces, depending on the structural form, while allowing the rotation of the shaft or components mounted on an axle (for example, a wheel). Rolling friction mostly occurs between the three main components of inner ring, outer ring and rolling element. Since the rolling elements in the inner and outer ring roll on hardened steel surfaces with optimised lubrication, the rolling friction of these bearings is relatively low. 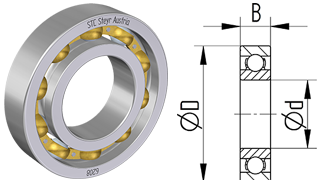 Deep-groove ball bearings are particularly versatile. In addition to allowing the absorption of radial loads, they simultaneously enable the absorption of axial loads in both directions. They are of simple construction, durable in operation and maintenance and suitable for high to very high rotational speeds.

Spindle bearings are single-row angular contact ball bearings comprising solid inner and outer rings and ball and cage assemblies with solid window-type cages, which are not separable and produced in open and sealed versions. 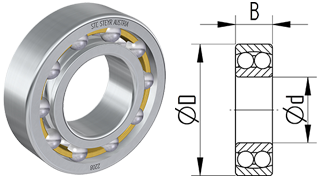 Self-aligning ball bearings are double-row, self-retaining units comprising outer rings with concave raceway, inner rings with cylindrical or tapered bore and ball and cage assemblies. They thus allow angular adjustment and are not susceptible to skewing of the shaft relative to the housing. They are therefore particularly suitable for bearing applications in which larger shaft deflections or alignment errors are to be expected. These bearings are available in open and sealed versions.